Pilgrims Hospices opened in Canterbury in June 1982, followed by Thanet in 1992, and Ashford in 2001. That means we have a lot to celebrate this year! 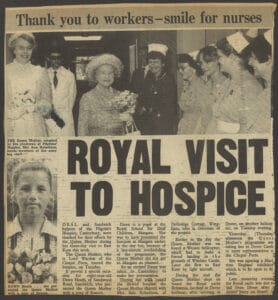 On 8 June 1982, Ann Robertson, the founder of Pilgrims Hospices, welcomed Her Majesty Queen Elizabeth the Queen Mother to oversee the opening of the hospice in Canterbury.

Ten years later, on 1 September 1992, the Thanet hospice was opened in the grounds of the QEQM Hospital in Margate.

Then, on 4 January 2001, after an overwhelming amount of support from the local community, the hospice at Ashford was opened. 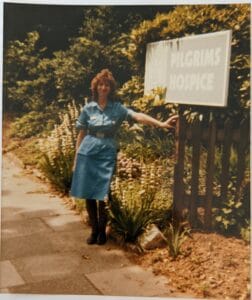 May 1986. I was so keen to join the Hospice team after hearing a lecture by Cicely Saunders, one of the founders of the Hospice movement, and felt it was the right place for me.

I left the hospice in 1989 to continue my training and then returned to Canterbury Hospice in 1992, as a Registered Nurse.

After having my family, I worked nights for a couple of years, before finally leaving Canterbury Hospice in 2000, to move to the Ashford Hospice, to set up the day services centre there.

Over these past years Pilgrims has grown and developed dramatically to meet the needs of the people of east Kent, but always with the wonderful philosophy to support and come alongside patients, families and bereaved loved ones throughout the latter part of their lives. I consider it a real privilege to have been part of this amazing team of staff and volunteers for so long."

If you'd like to join us to celebrate our special birthdays by donating you can visit our JustGiving or Facebook pages.

We'd also love you to share your memories of the last 40 years of Pilgrims Hospices, by contributing to our Memory Wall.

Celebrate with us today!

£15
could pay for one complimentary therapy session for a patient,
giving them a moment of relaxation and peace away from their illness.

£25
could provide an hour of specialist nursing care in
our hospices, at Canterbury, Thanet and Ashford.

£40
could cover four hours of staffing for our 24-hour telephone line,
providing advice and support to patients, their families, and other
healthcare professionals.

Thank you so much for your support

Every generous donation from our amazing community of supporters helps to make sure we can be there for the next family who needs us.

If you or someone you love has been diagnosed with a life limiting illness, find out about the full range of services Pilgrims can offer.