Kate Love from Folkestone shares her experiences of Pilgrims Hospices care. Not only has she become a valued member of Pilgrims’ volunteer team, she has first-hand knowledge and experience of how their services can support not only patients, but families too.

She speaks affectionately of her experience as a volunteer and as someone who has personal experience of the services available.

“Eight years ago my soul mate Ann and I had a party to celebrate my 50th Birthday, Ann’s 60th Birthday and her retirement from 36 years of teaching and headship. Life was good, and we really didn’t want or need any gifts therefore asked our guests (almost 200 of them) to make a donation to Pilgrims Hospices. We had a great party and raised about £2,000 in the process.

Eight years on, I had no idea how Pilgrims Hospices would become such a huge part of my life. After retirement Ann started to volunteer at the Ashford hospice, my school became involved in fundraising and developed a tradition of decorating the Christmas trees in the Therapy Centre in Ashford. In 2017, after taking retirement, I became a fundraising volunteer and Ambassador. I love being part of a team, learning more and more about the incredible work of Pilgrims Hospices and having the opportunity to ‘spread the word’ especially in schools.

Two years ago, my life changed considerably when my eyesight suddenly deteriorated and I was registered severely sight impaired, but thankfully with Pilgrims’ and Kent Association for the Blind’s support, I was able to continue volunteering. Some four months later I received even more bad news with a diagnosis of breast cancer which led to operations and radiotherapy but thankfully I’ve recovered and feel fine now.

Life then dealt its seismic blow. Ann, who was usually a larger than life character became unwell and within a short time of visiting her GP for various tests and an unfortunate fall that led to her being taken to hospital by ambulance, our lives simply fell apart when she received a diagnosis of terminal cancer.

The care and support we received was vast, varied, and so valuable. Medical support was provided through nurses from Pilgrims who visited and phoned regularly. They sensitively facilitated those difficult conversations about end of life care and the different scenarios which may arise over the months to come.

Despite Ann’s knowledge and insight into the work of Pilgrims Hospices, she was initially reluctant to be referred but thankfully this was short lived and she agreed. We both knew this was the right decision and cannot praise highly enough the support and care we received through Hospice at Home.

For me as a carer; the most reassuring thing was probably knowing that support was available 24/7 and the person on the other end of the phone was always so calm and reassuring and no query or worry was too small.  Moreover, there seemed to be a seamless link between the hospice and other services such as GP, community nursing and carers.

The care and support we received was vast, varied, and so valuable. Medical support was provided through nurses from Pilgrims who visited and phoned regularly. They sensitively facilitated those difficult conversations about end of life care and the different scenarios which may arise over the months to come.

There was also a wealth of practical support from hospice medical practitioners. We received home visits from both the physiotherapy and occupational therapy teams; their recommendations of equipment and adaptations were quickly implemented and enabled Ann to remain as mobile for as long as possible. Without their support Ann would not have managed to get out of the house at all – and more importantly she would not have been able to enjoy her ice cream by the sea! 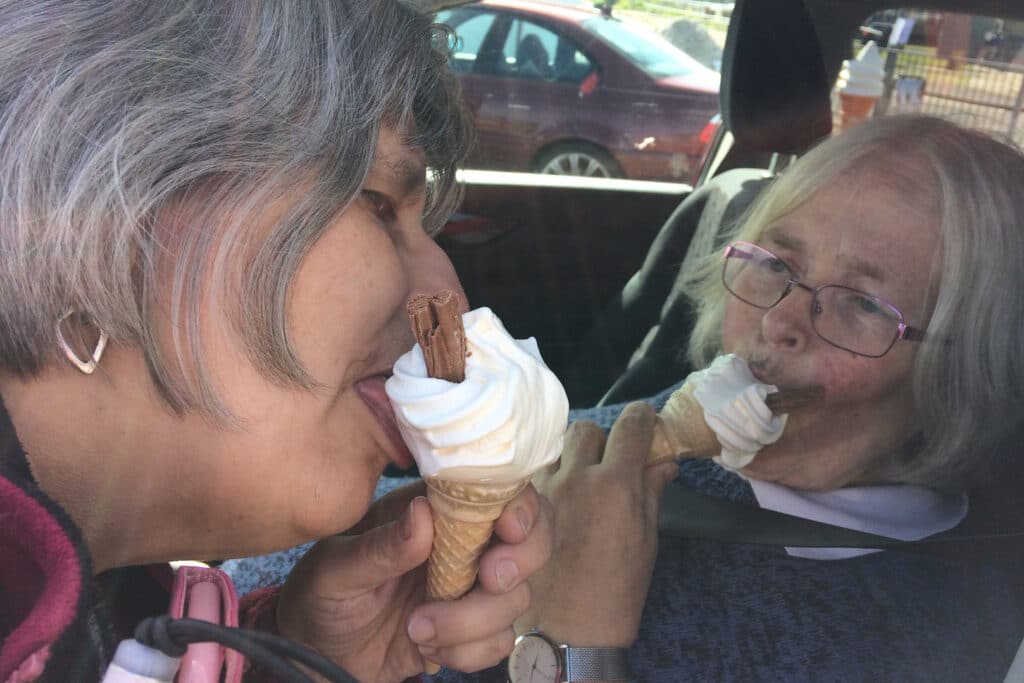 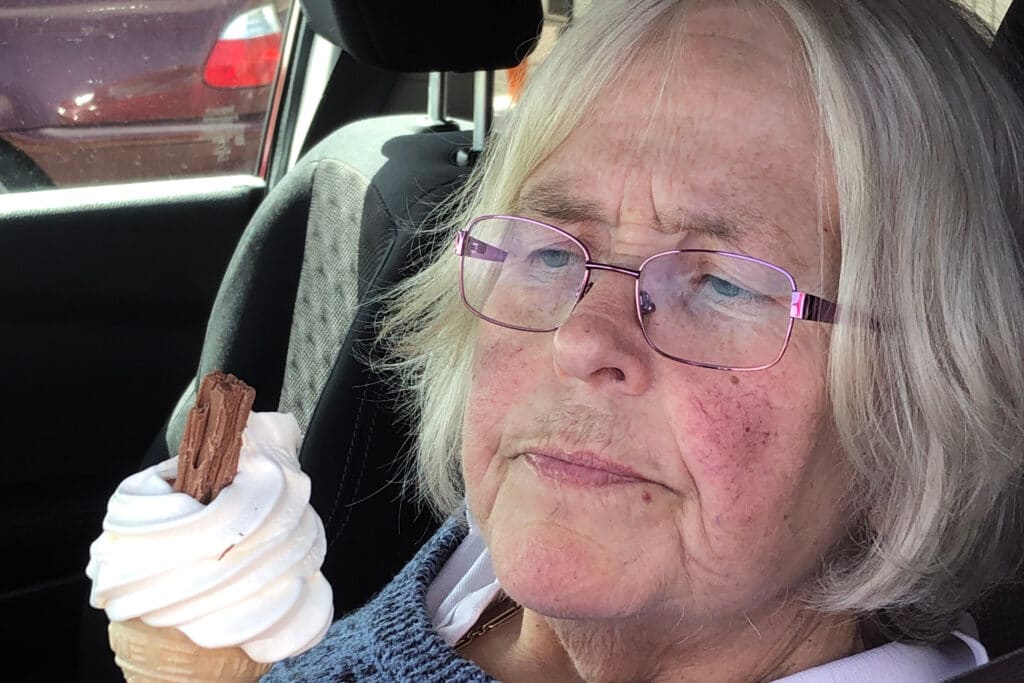 Hospice at Home service has a truly holistic approach, going far beyond the traditional medical support. There were regular visits from a member of the therapy team to provide massage and/or reflexology to both Ann and myself and it is incredible how these sessions helped us both. Running alongside this we both had access to counselling and although this is something I think we were both rather skeptical about, I know we both found the sessions useful as I think each of us was most worried about how the other was coping!  The bereavement counselling I received following Ann’s death was invaluable, the team were so understanding and supportive that my initial skepticism about counselling disappeared!

Hospice at Home is an incredible service which is still little known about, and nothing I could write would really do the staff justice; but suffice it to say they enabled Ann to fulfil her wish of staying at home until the very end surrounded by those she loved and those who loved her – something for which I will be eternally grateful.

Ann was so appreciative of the support and care provided by Pilgrims, as was I, but her illness didn’t stop her fundraising!  She insisted we continued to host our ‘Comedy at Home’ event which raised about £500 as she watched and laughed from the comfort of her bed. We had an endless stream of visitors so Ann saw this as a fundraising opportunity, she proceeded to become the star raffle ticket seller for Ashford hospice’s Summer Draw, raising £500 – after all, how could anyone refuse to buy a ticket from her?

Ann’s birthday was on 26 September and with her inimitable dry sense of humour she said, ‘What do I need where I’m going?’ So, she did a Facebook fundraiser, she was totally overwhelmed by the fact this raised £2,500.

Four days later, on the afternoon of 30 September 2019, Ann died peacefully at home.

Hospice at Home is an incredible service which is still little known about, and nothing I could write would really do the staff justice; but suffice it to say they enabled Ann to fulfil her wish of staying at home until the very end surrounded by those she loved and those who loved her – something for which I will be eternally grateful.”

Inspired to become a Pilgrims’ volunteer?

Visit pilgrimshospices.org/volunteer and look out for more stories and information throughout Volunteers’ Week!

Volunteers’ Week is a chance to say thank you for the fantastic contribution millions of volunteers make across the UK. It takes place 1-7 June every year and is an opportunity to celebrate volunteering in all its diversity.

We’re accredited by REVAMP, a quality mark for Volunteer Involving Organisations developed by Stronger Kent Communities, a leading provider of support for the voluntary sector in Kent.