Ben Rogers from East Malling has supported Pilgrims Hospices over recent years by fundraising for them with his epic marathon running. This year he’s decided to take on a new challenge, the Last One Standing race, on 9 June 2018.

Starting at 12pm runners have one hour to complete the first 4.2 mile loop and then need to be back at the start line ready to go at 1pm, then again at 2pm and so on. This will happen every hour until there’s only one runner left at the start line.

“I decided to start fundraising for Pilgrims after I lost my step-father, Doug, to kidney cancer in November 2015. Pilgrims Hospice Ashford were amazingly supportive to both Doug and my mum. Before coming into contact with Pilgrims, my belief was that hospices were sad places to be at the end of someone’s life. That couldn’t be further from the truth, so I wanted to do something to raise funds for them.” 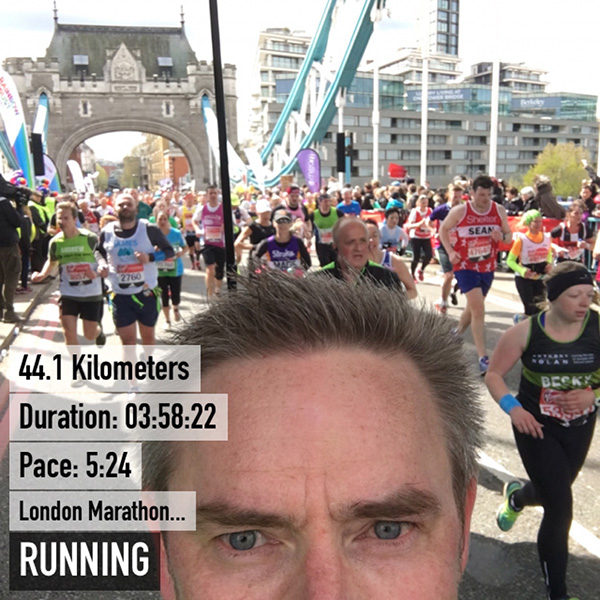 Ben initially decided to run just one marathon in aid of Pilgrims, but after researching and befriending several multiple marathon runners he was inspired to take on the challenge of doing one a day for a year.

The idea of running a marathon every day sounded completely nuts looking back on it, but when I was doing it, it seemed completely normal.

Ben started his original incredible challenge at the London Marathon in 2016 and finished by running the Brighton Marathon a year later in 2017, running a total of 9,563 miles! He explained: “The idea of running a marathon every day sounded completely nuts looking back on it, but when I was doing it it seemed completely normal.”

After taking part in the Brighton and London marathons once again in 2018 Ben wanted to do something new so he decided to take part in the Last One Standing event, which is very much an endurance race.

Isabel Smith, Community Fundraising Officer at Pilgrims Hospice Ashford, said: “We wish Ben strong legs and much perseverance as he takes on this new challenge. The money he’s raised for Pilgrims Hospices enables us to continue offering our care free of charge to the people of east Kent.”

If you’d like to sponsor Ben for this endurance challenge please visit his JustGiving page.

If you or someone you know is coping with a life limiting illness and you think you may benefit from Pilgrims support, talk to your GP or Healthcare Professional about the options or visit our Wellbeing and Social Programme.