Who has the Pet-tential to be crowned the winner?

Introducing the brand new event that has really set tails wagging! The Pilgrims Virtual Pet Show is a fun online pet photo competition that gives you the op-paw-tunity to share your animal companions with us and the world.

Absolutely any kind of pet can be entered into the contest including dogs, cats, rabbits, guinea pigs, gerbils, hamsters, lizards, snakes, fish, tortoises, chinchillas, ferrets, horses and any other animal that you own as a pet. 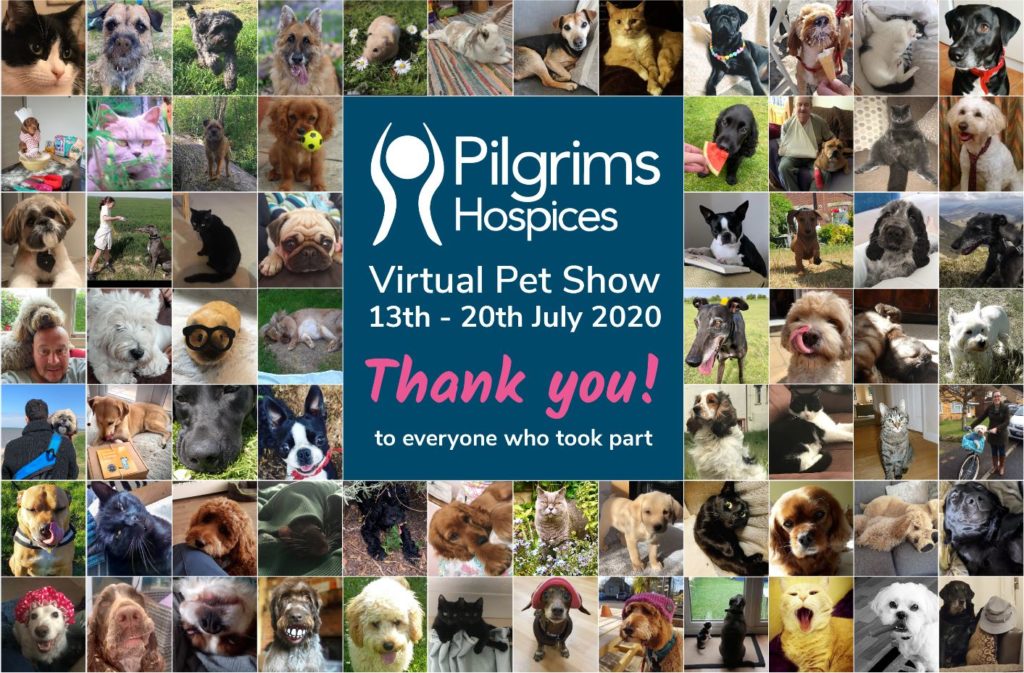 There are six categories to enter, so there’s bound to be the paw-fect one to show off your pet’s finest features. 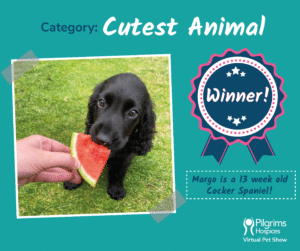 Aren’t animals just the cutest?! Submit photos of your pet looking, or doing something, super cute.

Submitted by her owner, Katy, Margo stole our hearts with her big brown eyes and long curly-haired ears. We also loved the bright colours of the photo in contrast to her glossy black coat. Congratulations Margo, you cutey! 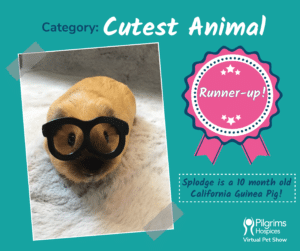 Submitted by her owner, Kara, Splodge made it into the runner-up spot for her cute, little face, glossy coat and generally being a bit of a poser. Kara told us, “She is a cheeky little guinea pig who loves playing with her two sisters and eating peppers.” 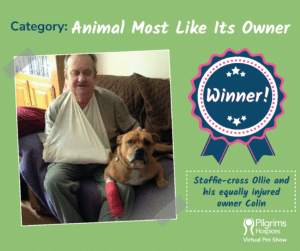 Sometimes, we’re a reflection of our best friends. Submit photos of you and your pet that illustrate your similarities, in looks or behaviour!

Submitted by Kathleen, she told us, “Just a couple of weeks after rescuing Ollie from Battersea Dogs Home, he managed to break his paw while chasing a squirrel over some logs; two weeks later his owner Colin tripped and broke his wrist too!”

With their matching casts, we think Ollie and Colin make for a right clumsy pair! 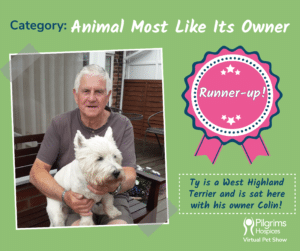 Submitted by Brenda, she told us, “We got Ty from Last Chance Rescue in Edenbridge. He’s been with us now for 7yrs and we believe he’s between 11-12 years old. Though he was a little naughty to begin with, he’s flourished during his time with us and turned into a lovely dog that’s full of character.”

We think that Ty and Colin look like the perfect white-haired companions for each other and make worthy runner-ups for the Animal Most Like Its Owner category. 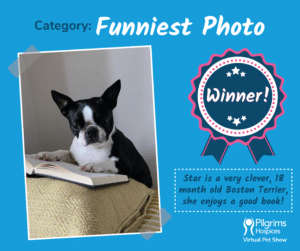 Animals can do things that make us laugh until our sides split. Submit photos of your pet doing something funny, making a silly face or generally being a klutz!

Her owner, Alison, told us, “She may be young but our clever Star loves nothing more than getting her nose stuck into a good read.”

Congratulations Star, you hit our funny bone with how engrossed you are in your latest Virginia Woof novel. 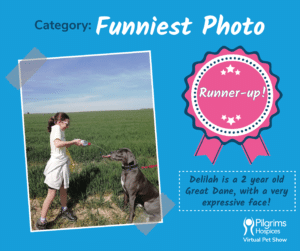 We loved Delilah’s photo for capturing her hilarious impression of a living water fountain and the shear expectation in her demeanour that the water will come to her! 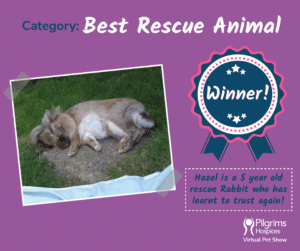 Everyone deserves a second chance at happiness. This category celebrates all of those amazing rescue animals out there that bring us such joy. It’s their time to shine!

We fell in love with Hazel for her fluffy coat, loving contentment and her story of learning to trust again.

Her owner, Becky, told us, “She was in a rescue centre looking for a home when we met her. She had already been re-homed once but was returned after a few days, and since then she had been waiting for quite a while. Apparently, people passed her by for younger, friendlier and ‘prettier’ coloured rabbits. Now look at her! So trusting that she hopped along to our garden picnic and fell completely asleep next to us. We love her and this will be her forever home.” 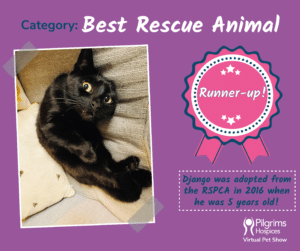 His owner, Alice, told us, “Django is a special cat. He’s polydactyl, meaning he has 23 toes, rather than the usual 18, including two thumbs. Fortunately he’s not clever enough to use them for anything other than catching scrunchie balls. The odd number of toes may also be the reason he is extremely clumsy; known injuries to date include a broken pelvis, tail and leg along with innumerable bumps and scrapes making him a favourite at the vets. He may be comically accident prone, but he’s also the most loving companion anyone could ask for and we’re so glad we were the ones to give him a second chance.”

Django, we loved your glossy black fur and inquisitive eyes and think you’re a fantastic runner-up for the Best Rescue Animal category. Thumbs up! 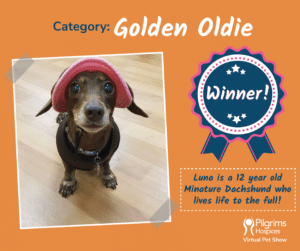 Some things just get better with age. Submit photos of your animal companions who have been by your side for as long as you can remember. They may be long in the tooth, but they’ve got bundles of character!

Her owner, Jo, told us, “She lives life to the full and loves to play all day with a ball of any size. Someone needs to tell her she’s a golden oldie as she still acts like a puppy. She lives with her 8-year-old daughter and 4-year-old granddaughter and can still out run them!”

We loved Luna for proving that even grandmothers can be young at heart. 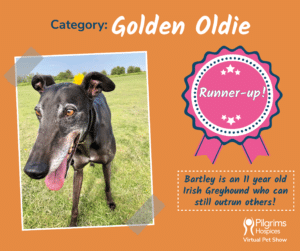 Category Runner-up: Bartley, the 11-year-old Irish greyhound who loves playtime at the park.

Submitted by owner, Sarah, she told us, “Bartley was rescued at the age of 1 and a half, before he had to race. He’s had two operations on his leg over the years, so he’s not as fast as he used to be; but generally leaves other dogs in his dust at the park! He’s a lovely, good-natured, old boy.”

We loved Bartley for his big smile and love of running freely in open spaces; as well as his refusal to let the young ones best him at a race! 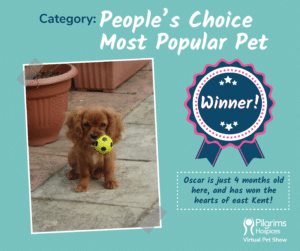 An open category for any type of pet photo you can think of. Every single valid submission will go into our public vote with a chance to be crowned the winner of ‘Most Popular Pet’.

Oscar has won the hearts of east Kent with his adorable over-sized puppy paws, beautiful, soft coat and cute pose with his ball. 💙

Thank you to everyone who submitted their animal companion into the Pilgrims Virtual Pet Show. Together, you’ve helped to raise awareness and vital funds to support our specialist nursing care and enabled Pilgrims to be there for the next family who need us.

It’s just £3 per category to submit a photo for official consideration with all proceeds going directly to supporting the skilled and compassionate end-of-life care of Pilgrims nurses, doctors and support staff who are Still Here; Still Caring for people living with a life-limiting illness.

Visit the Pilgrims Virtual Pet Show Facebook Event to enjoy hundreds of amazing pet pictures and share yours too! You can share your pet’s photo even if you haven’t entered an official submission yet, it’s all part of the fun. Just remember that only officially submitted pets will be in with a chance of being crowned the winner!

Submissions: Open for all categories between 29th June – 9th July 2020 (Except for ‘People’s Choice Most Popular Pet’ which remains open until 15th July).

Judging: The winners of the first five categories will be decided by a panel of Pilgrims staff on Friday 10th July.

The ‘People’s Choice Most Popular Pet’ award will be decided by public vote in our Facebook event between Friday 17th – Monday 20th July 2020. This public vote will include all submissions to the category and the winner will be the pet that receives the highest number of ‘likes/reactions’ to its photo by 2pm, 20th July.

Winner announcements: The winners of the first five categories will be announced here and on the Pilgrims Virtual Pet Show Facebook Event between 13th – 17th July, with the final People’s Choice winner being announced on Monday 20th July 2020.

All winners will receive:

We can’t wait to see all of your paw-fect pet photos!