Ride it your way by choosing between a 120-mile, 200-mile or 330-mile challenge that represent the equivalent distance of riding between 10, 15 or 25 historic English castles before the end of September. The 25 Castles virtual route begins at the impressive Arundel Castle in West Sussex, and showcases the beautiful landscape of the south coast and Kent countryside in an epic tour through the region's rich history, dating back as far as the Roman conquest. Rolling hills, ancient forests, chalk cliffs and quiet country lanes all await exploration from your own doorstep.

The 15 Castle virtual route starts from the beautiful Hever Castle, childhood home of Anne Boleyn, and the 10 Castle virtual route begins at England's largest, Dover Castle. Whichever distance you choose, you'll be riding towards the same goal - to reach the gates of the famous Tower of London before the end of the month!

Starting from, or near to, your own home, you'll be able to track your progress, and everyone else's, along a virtual route map using the award-winning Pilgrims event App. Ride your favourite local routes, or plan to cycle to your nearest castle. Simply ride when and how often you can throughout September and see if you can reach the Tower of London before the month is up. You can even include the miles you do on an indoor training bike.

Along the way, you'll 'visit' crumbling Roman fortresses, Norman strongholds, the height of Tudor opulence and imposing medieval coastal defences that were still in use during the Second World War. It's a truly memorable experience and we're giving you the chance, wherever you live, to take on this bespoke virtual challenge to help raise vital funds for Pilgrims specialist end-of-life care.

Press the blue buttons to load all rider positions for each of the challenge routes.

Cycling is good for us, both for our physical fitness and mental well-being, and you can join our friendly community of Pilgrims Hospice cyclists in our Pilgrims Hospices Cycling Facebook group.

It's tough but achievable; with some training and determination anyone can conquer the Tour de Castles. Why not complete the ride with friends, family or your local club to make the journey even more enjoyable.

To take part in the Tour de Castles, simply enter via the 'Register Now' button at the top of this page. Once signed up, you'll receive instructions on how to record your cycling activities and track your progress along the virtual virtual route map using the award-winning Pilgrims Event App for iOS and Android devices.

It’s free to download from the App Store and Google Play and, along with the free companion app MapMyTracks, will track your cycling activities throughout September and update your position along the interactive route map above; so you can see exactly how far you've come and how far you have left until you reach the Tower of London. You can also like and comment on your teammate's activities, earn Achievements, receive up-to-date event information and link your JustGiving page to see how your fundraising is going, all in one place.

The challenge runs from 1st - 30th September and all of your cycling activities recorded via the Pilgrims Event App during this time will count towards your overall progress along the Tour de Castles route.

You can use any route you like in order to reach your mileage goal. So if you have some favourite routes around your local area, then please use those to do your virtual ride. Or, plan a special route that visits some of the castles in your area. You can break the mileage down into as many days as you need to throughout September. All that matters is you cover the distance.

Every participant will receive exclusive digital milestone ‘badges’ upon entering that they can share as they complete milestones in their journey on social media and elsewhere to show your support for Pilgrims Hospices.

Please note: Only activities recorded using the Pilgrims Event App (MapMyTracks) AND with the activity type of 'Cycling' and set as 'Public' will be included in your progress along the virtual map below. If you wish to use Strava or another fitness app to record your rides, that's fine, but remember to add those miles manually to the Pilgrims Event App so they count.

Achievements are an exciting feature within the Pilgrims Event App. During the Tour de Castles, as well as the digital milestone badges along the way, you can earn badges within the app for completing all kinds of Achievements.

The app will automatically recognise when you have achieved the criteria for any of the badges and add it to the 'Achievements' page within the 'Profile' area of the Pilgrims Event App, together with the date that you earned it!

Eg. Once you have recorded your first ride during an event, either by MapMyTracks recording or by a manual upload, you will earn the Back in the Saddle badge. 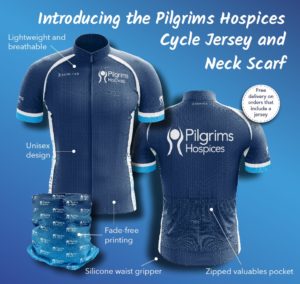 We're excited to bring you the official Pilgrims Hospices cycle jersey and neck scarf. Show your support out on the road with these stylish, quality garments, packed with great features such as a zipped valuables pocket, full-length zip and silicone waist gripper. We also have Pilgrims neck scarfs, ideal for keeping you warm on cold or windy days and providing shade from the sun on hot days. Grab yours today and help us be there for thousands of people coping with incurable illness in east Kent.

Add yours via the event registration form or order yours today by contacting Supporter Relations on 01227 782062 (weekdays 9am-5pm) or anytime at robert.grew@pilgrimshospices.org.

We need your help to be there for people living with an incurable illness and encourage you to raise as much sponsorship as you can for your challenge! If you raise:

By doing your part for Pilgrims Hospices, you'll truly be making a difference to the lives of our patients. Here's how: