Rob Maynard from Deal experienced Pilgrims Hospices’ care first-hand when his mum, Susan, was diagnosed with motor neurone disease (MND) and received support from the charity at the end of her life.

To give back and say thank you, Rob will run the Virgin Money London Marathon for Pilgrims on Sunday 3 October 2021. He has already raised more than £3,000 of his £5,000 fundraising target, partly through completing the virtual London Marathon in October 2020.

Susan was married to Rob’s dad, Derek, for 49 years; they missed reaching their golden wedding anniversary by less than three months, but the family still mark special dates like this together. Originally from Portsmouth, the couple moved around for Derek’s job as a Customs Officer while Susan raised their young family: Kirsty, Neil and Rob. Susan taught at primary schools around Deal throughout the 1980s and 90s, before retiring together with Derek when they were both 51.

Rob said: “They worked hard to retire early because Mum had polycystic kidney disease (PKD), the same degenerative kidney condition that had limited her mum’s life. They wanted to make the most of their later years together, and they got to do the travelling they hadn’t been able to do with a young family now that we were grown up.

“They always enjoyed the simple pleasure of driving to the south of France to see the sunflowers in July; they were Mum’s favourite flower.”

Rob and his family also take part in Pilgrims’ annual Sunflower Memories event, where they remember Susan with a sunflower memory marker in the hospice gardens.

As Susan’s kidney condition worsened, she required dialysis and the search for a donor began. Rob’s sister Kirsty was best placed to be her donor.

Rob added: “After receiving Kirsty’s donated kidney, Mum was frequently in hospital with various infections. All along, unbeknownst to us, MND was creeping up on her. We all did what we could to make her life as comfortable and fulfilled as possible.

“She went into hospital in October 2018 and was seldom home except for a week from Christmas eve to new year, which was amazing. We went to a Christingle service from my parents’ house, and when we returned an hour later, the ambulance had delivered her home – the best Christmas present!”

By January 2019, Susan’s condition had deteriorated and she was referred to Pilgrims.

Rob said: “Moving Mum from a hospital ward and into Pilgrims was the best course at that stage. Mum died in the Canterbury hospice on 22 January 2019, aged 71. My dad and one of her best friends were by her bedside.

“Before Mum went to Pilgrims, I didn’t know much about hospices, how they care for the whole family not just the patient. It was comforting to know she was in the best place for her complex needs. The fact my dad could stay overnight was a massive comfort and convenience, allowing him to spend as much time as possible with her before the inevitable.

To know that the care and dignity my mum received has and will be valued by so many other families in our local area makes Pilgrims, their staff and supporters very special and important.”

“The most important thing was that she could spend her remaining time in a peaceful environment with dignity. The care that Pilgrims staff gave Mum was personal and empathetic, allowing our family to enjoy the time we had left with her. It was also an opportunity to invite friends from far afield to see her and say goodbye. All the grandchildren saw her a few times in her last weeks at Pilgrims. This simply wouldn’t have been possible if she’d been on a hospital ward.

“From my perspective, Pilgrims provides the best possible end of life experience for the terminally ill, their friends and family. To know that the care and dignity my mum received has and will be valued by so many other families in our local area makes Pilgrims, their staff and supporters very special and important.” 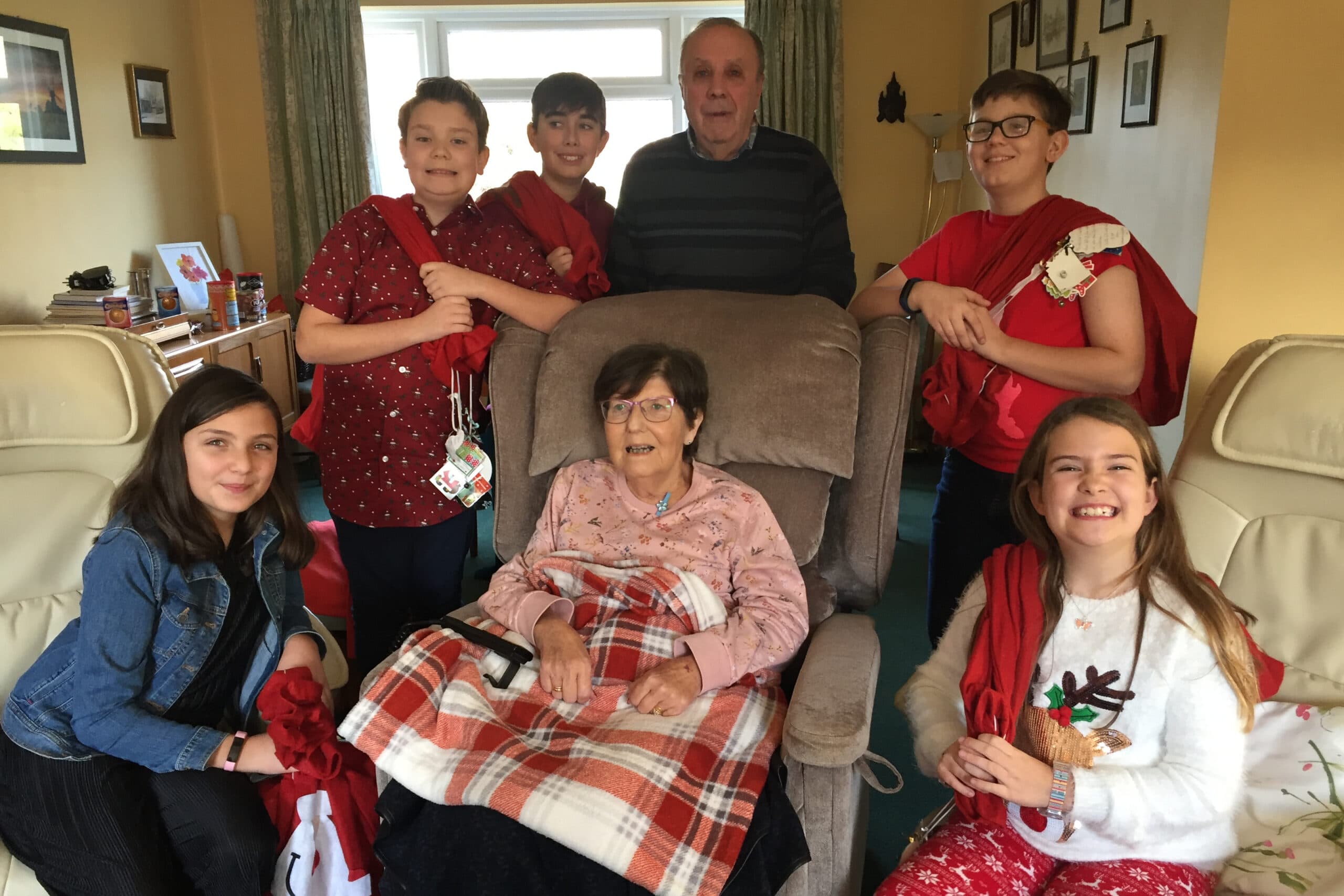 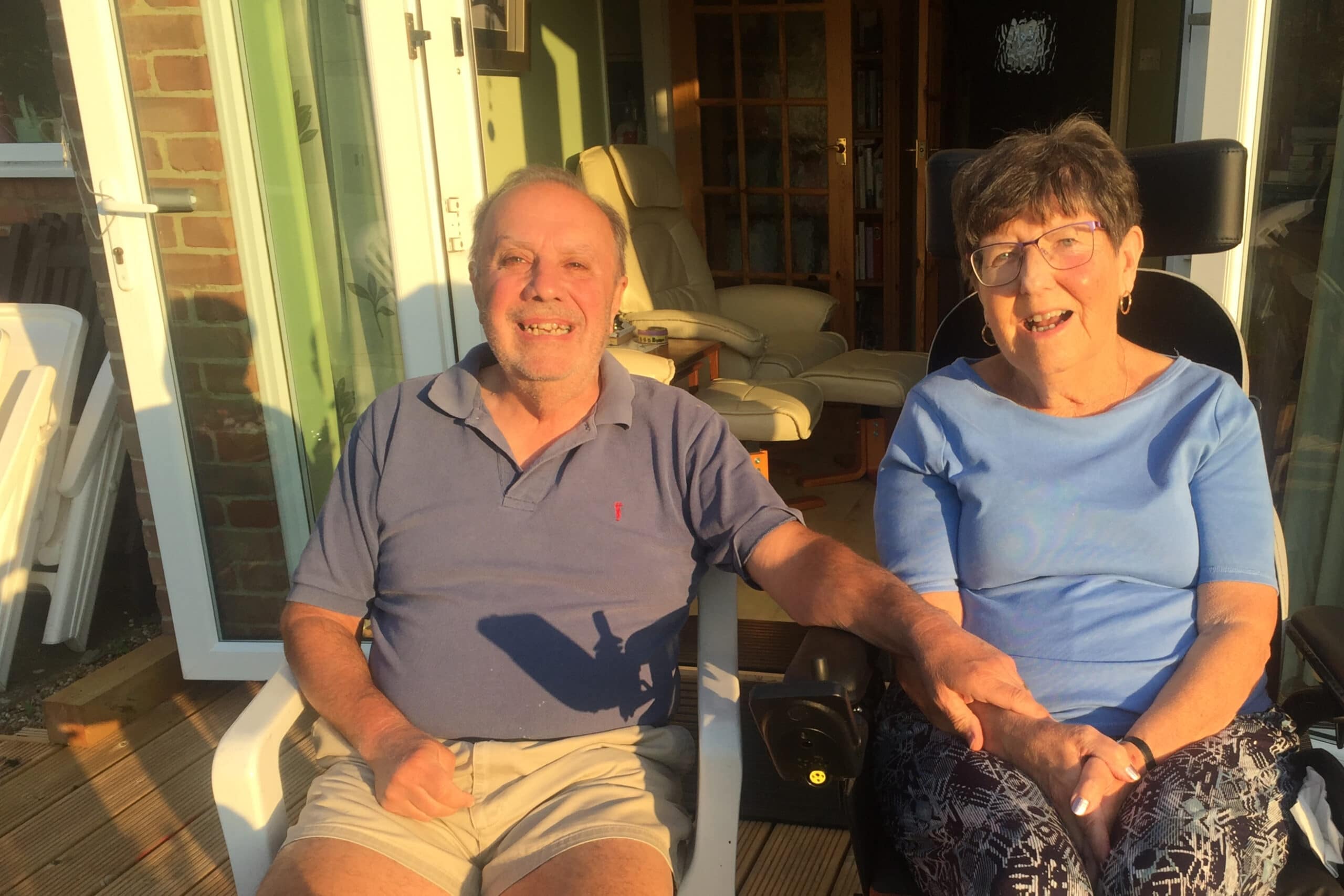 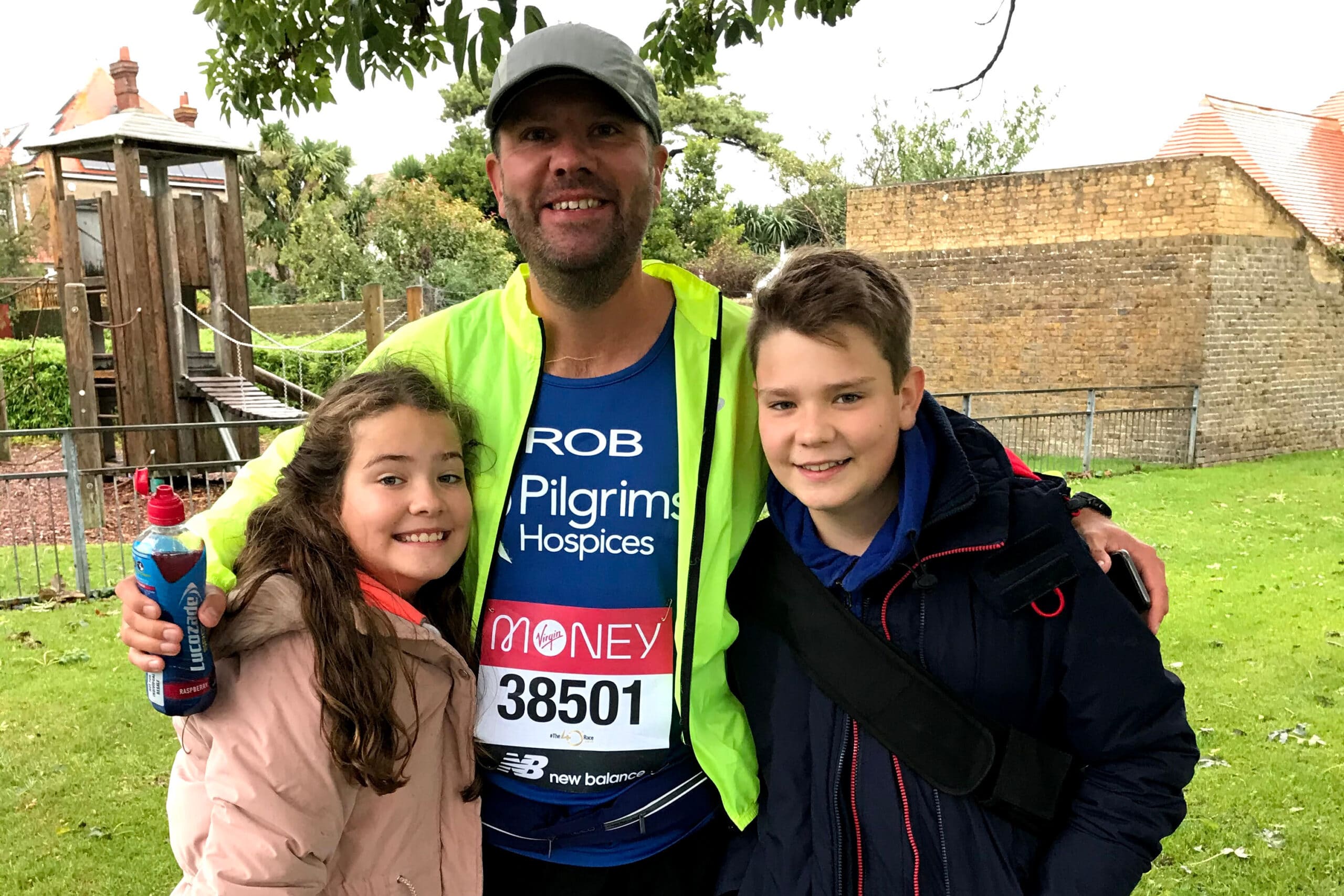 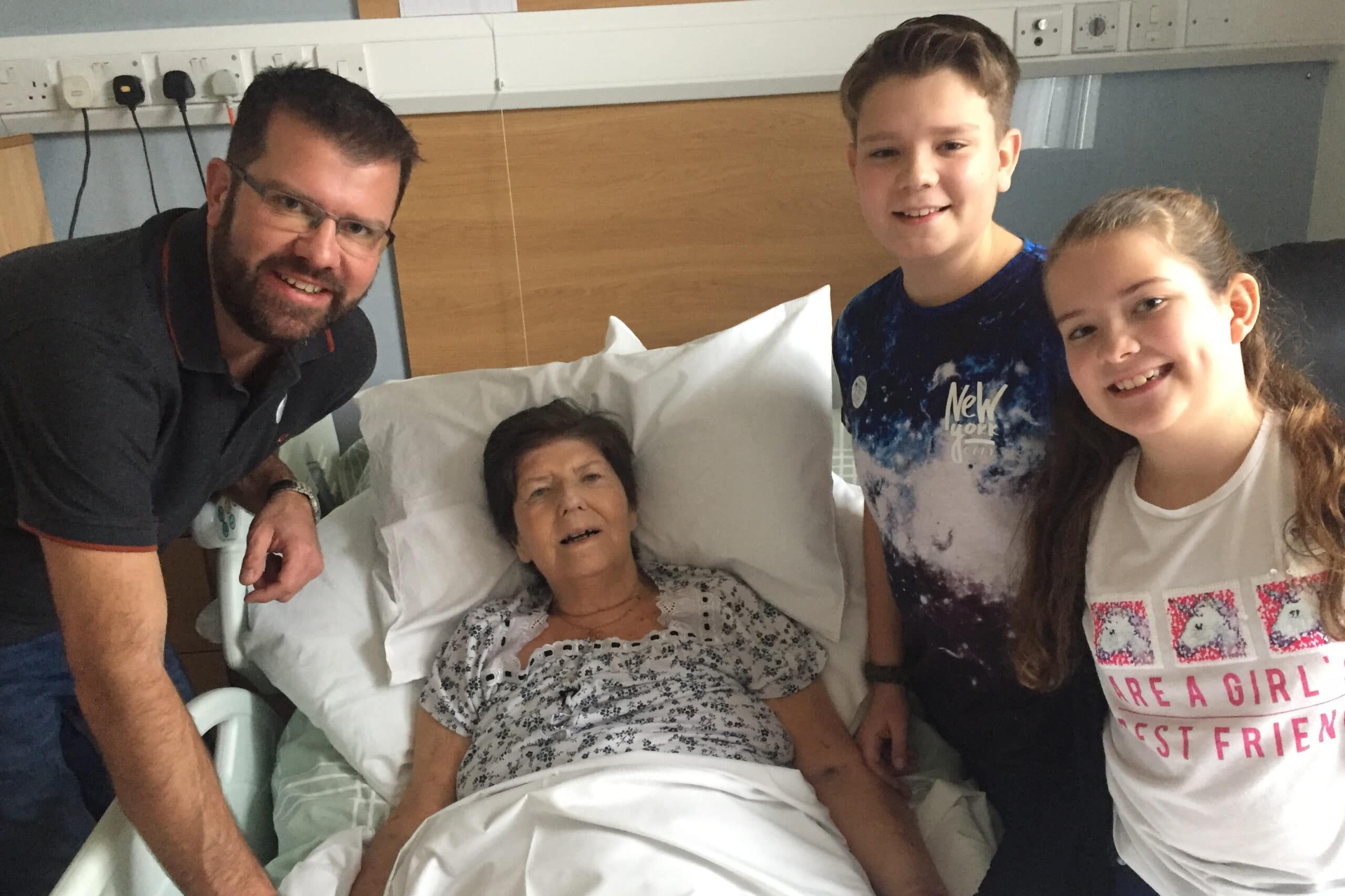 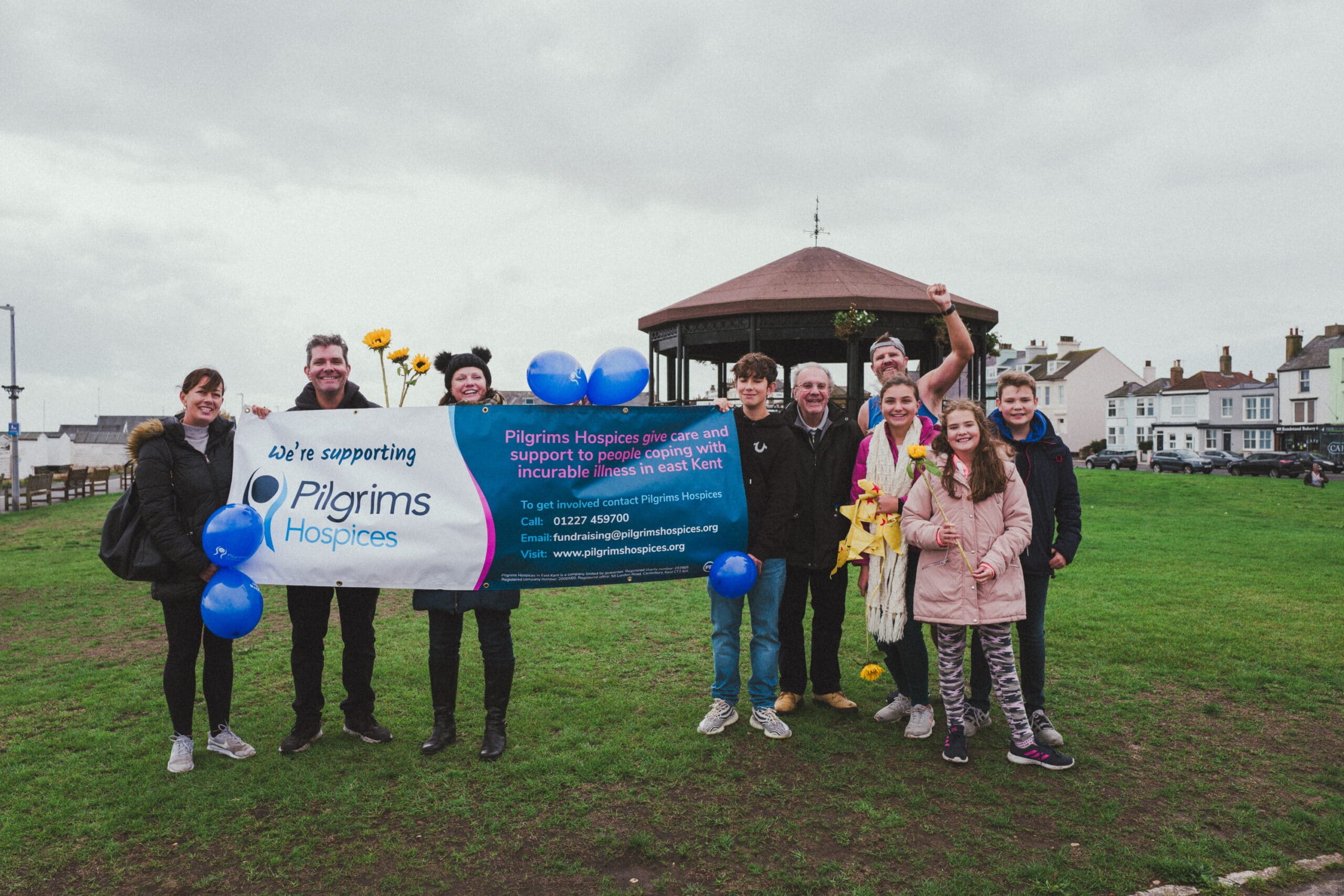 Rob was due to run the London Marathon for Pilgrims in April 2020, but the COVID-19 pandemic meant this was postponed. Instead, he completed the virtual event in and around Deal in October 2020:

“I did this alone but on the same day as members of a local club, Deal Tri, which meant the support on the route was fabulous. It was all very muted at the finish due to the restrictions in place, but for that event in total I raised around £3,000.

“My close family are supporting me in giving back to Pilgrims and helping me achieve a lifelong ambition to run a marathon. Running for a great cause makes the pain of training worth it, and the event itself will be one of the most fulfilling experiences of my life.”

My marathon training itself has led to some very emotional times. On the big day this October, the thought of how proud my mum would be of me will keep me going.

He continued: “I’m choosing to fundraise for Pilgrims to help support the fabulous work they do for patients and families in east Kent. I’m sure everyone who is touched by them feels compelled to give something back.

“My marathon training itself has led to some very emotional times. On the big day this October, the thought of how proud my mum would be of me will keep me going. Ultimately, my mum’s passing at Pilgrims has its legacy in my love of running and the opportunity of running the London Marathon; for that, I will be eternally grateful.”

You can keep up to date with the Rob’s fundraising journey on his Virgin Money Giving fundraising page.

Inspired to follow in Rob’s footsteps and run the London Marathon for Pilgrims? Charity places for 2022 are available; apply here.