Luke Verlander from Broadstairs experienced Pilgrims Hospices’ care first-hand when his mum, Sherrie, was supported by the charity in 2013.

To give back and say thank you, Luke and his family have since raised more than £8,000 for local hospice services in east Kent, and their fantastic fundraising continues.

On Sunday 12 December 2021, Luke and his sons, Kieran (10) and Nate (7), will take part in Santas on the Seashore! in Margate, part of Pilgrims’ Festive Tri-Series of family-friendly 5k events to raise vital funds for the charity.

Sherrie was diagnosed with late stage bowel, liver and lung cancer in 2013, after attending a scan for suspected irritable bowel syndrome (IBS). She died just 50 days later on 18 March, aged 55.

Sherrie was referred to Pilgrims Hospice Thanet a few weeks after her diagnosis.

Luke said: “Mum fought bravely. The Pilgrims staff and volunteers were absolutely fantastic; they were really good for, and with, her and my dad Jim, who rarely moved from her bedside. They were friendly, helpful and, most importantly, passionate about their roles.

“Without a doubt, Pilgrims offers the very best service that you hope to never need. They were so good for our family.” 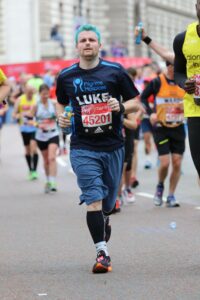 Over the years, Luke has taken on several fundraising events for Pilgrims. He ran the London Marathon in 2016 and 2017, braved a 120mph Wing Walk and participated in the charity’s It’s a Knockout! event with family, friends and colleagues.

Luke has also organised his own events, including football tournaments, lottery games, raffles and more. He even invented a Pilgrims Hospices Shield trophy for the football matches.

He continued: “My son, Kieran, enjoys running with me. In 2019, when he was eight, we did Santas on the Run! and raised £260! He wanted to do it again, and this year he’ll be joined by his youngest brother, Nate, who is just seven years old.

“We’re supported in our fundraising by friends, family, colleagues, my employer with matched funding, complete strangers (friends of friends via Facebook posts) and local businesses that donated prizes for the raffles or directly sponsored events.

“As a family, we’ve raised around £8,500 for Pilgrims to date. I can only thank all who have supported us over the years; it truly is a very deserving cause.”

Karen Kenward, Community Fundraising Manager, added: “I have had the pleasure of knowing Luke and his family for many years now and have seen his family grow and grow up along the way. Luke has taken on many challenges to help support vital end of life care for the next person that needs us.

“Luke and his family are always looking for that next challenge and other ways they can continue to support our charity, and most importantly raise awareness. We really could not continue to run our services if we did not have the ongoing support from our overwhelming local community. Thank you.”

Luke and his family choose to support Pilgrims so that the charity can continue providing its vital care to local families who will need it in the future.

He added: “Pilgrims needs funding through donations to continue offering this vital care. My family support them so that they can continue providing this to local families who will need it in the future.”

Click here to support Luke, Kieran and Nate via their JustGiving page.

Santas on the Run! Festive Tri-Series takes place on the following dates in east Kent:

Take on your local 5k or sign up for all three – the choice is yours!

Register now to join the jolliest jog of the year.