On Sunday 22 August 2021, Paul Maxted and his son, Alfie, from Ashford cycled 50 miles around east Kent, raising more than £700 for local hospice care.

Paul said: “Following long battles with terminal illnesses, we lost my father to cancer and Rog to idiopathic pulmonary fibrosis (IPF) within three weeks of each other; it was devastating, to say the least. The most painful part was watching them both succumb to these terrible illnesses as my wife and I provided care and support. We were lucky to have two such wonderful, loving and inspirational role models in our lives, and we gain some comfort in knowing we carry them in our hearts and thoughts for eternity.

“Pilgrims cared for my dad and Rog both on the hospice ward and at home at the end of their lives. They were superb, providing equipment, personal care and support to them and our family. The staff showed real empathy and understanding; they were never too busy to take a call or give us time to understand what was happening, all the way until the end.”

To give back and say thank you, Paul and his son Alfie decided to take on the Pilgrims Hospices Cycle Challenge to ensure that other families continue to benefit from local hospice care.

Paul added: “I’m a keen footballer and runner but cycling isn’t my choice of activity! So this was a real challenge for me (and my rear end). I’m so grateful for the support we’ve received from family and friends; any donation, no matter how big or small, is hugely appreciated.

“Pilgrims made a very sad time easier for both my dad and Rog during their battles, giving us as a family a small piece of comfort knowing that they did not suffer. We want to support Pilgrims so that more people can receive the level of empathy and care we did, both now and in the future.”

You can still sponsor Paul and Alfie now that they have completed their challenge by visiting their JustGiving page.

Inspired to get on your bike and fundraise for Pilgrims?

Cycle Challenge returns on Sunday 1 May 2022; register your interest today:

On Thursday 6th August cycling enthusiast and dedicated long term Pilgrims Hospices supporter Paul Kelly, cycled 100 miles for Pilgrims Hospices. Paul, who likes a little adventure, and is a 73 year old retired Marine Engineer, decided that after the unfortunate cancellation of Pilgrims Cycle Challenge that he would utilise his lockdown training over the last few months and get back in the saddle on his own carefully thought out 100 mile route. 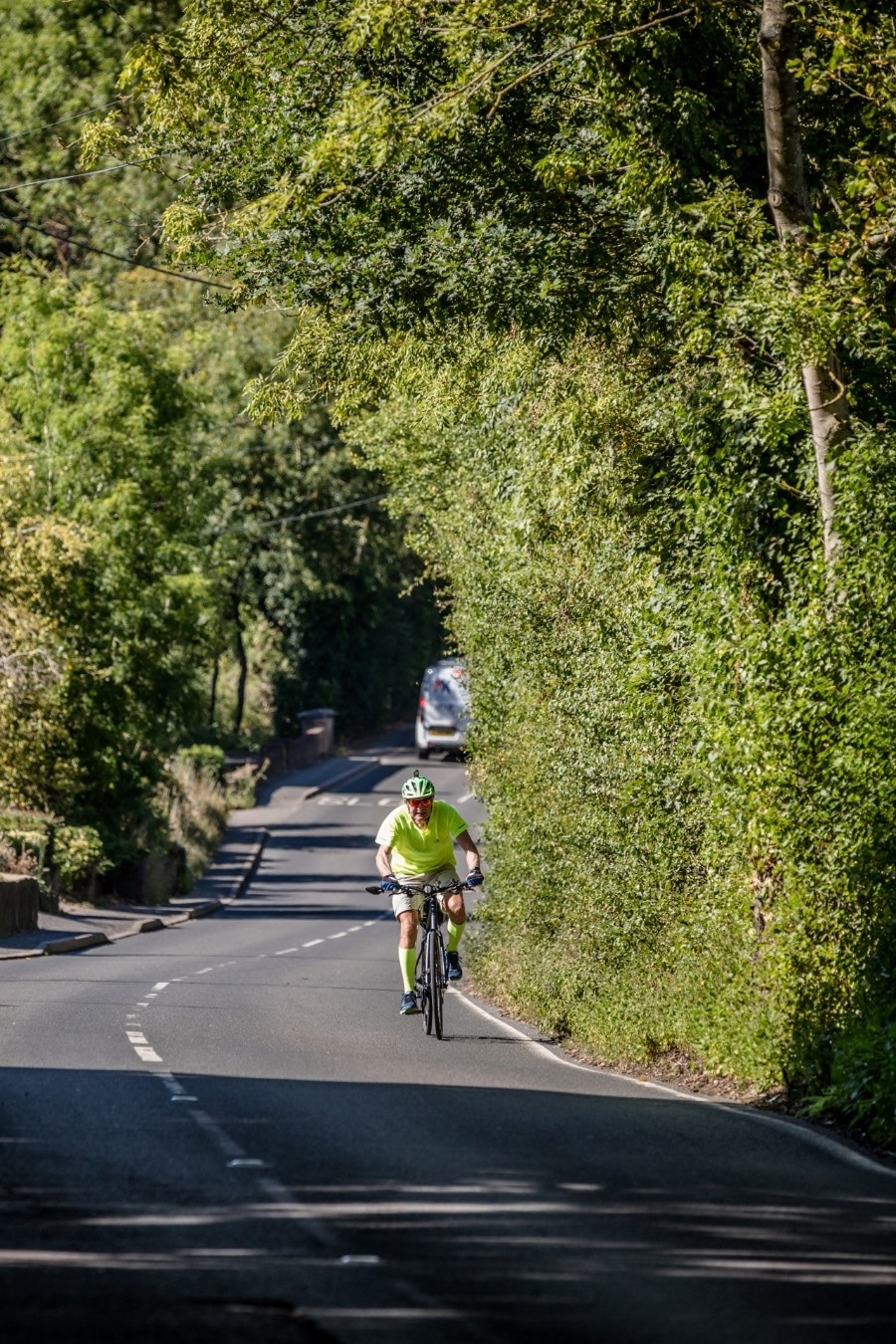 Paul planned his own ‘feed stations’, including one at his home at Whitfield near Dover. Not only did Paul cycle 100 miles, but he also did it on one of the hottest days of the year! Purely a coincidence, Paul also chose to complete the challenge on #CycleToWork day, which this year was changed to Cycle to Who? What? Where? Day because of the pandemic.

We would like to thank all those who have supported Paul in raising an impressive £1,700

Paul explained: “My wife and I did our first Pilgrims Cycle Challenge on the 50 mile route to Margate, when this route was changed I tried the 75 mile challenge. Of course, I then had to attempt the 100 challenge the next year and the year after, regrettably the 125 epic would be too much for me as I wouldn’t get back in time for my medal!”

“This year having stated training in March for the postponed May event, I kept in shape for the new event due to take place on 23rd August. I seriously doubted early on that cancellation of the event was a real possibility so I planned my own 100 mile challenge roughly based on the Pilgrims route which I completed on 6th August”.

“One of my reasons for supporting Pilgrims Hospices is for the fantastic treatment my father-in-law was given in the Canterbury hospice where he passed away with motor neurone. Our family were so relieved to see how his last days were made as comfortable as possible, we cannot thank you enough.”

Fuelled largely by flapjack to counter the 6,000 calorie burn, the 73-year-old left Canterbury East train station at 7.45am. Stowting Hill and the climb out of Shepherdswell near Dover were the biggest spikes on his Fitbit and the heatwave added to his challenge. Paul finished the circular course at 4.15pm, at his finish line he was greeted with surprise smiles, cheers and a balloon arch held up by the little members of his family. 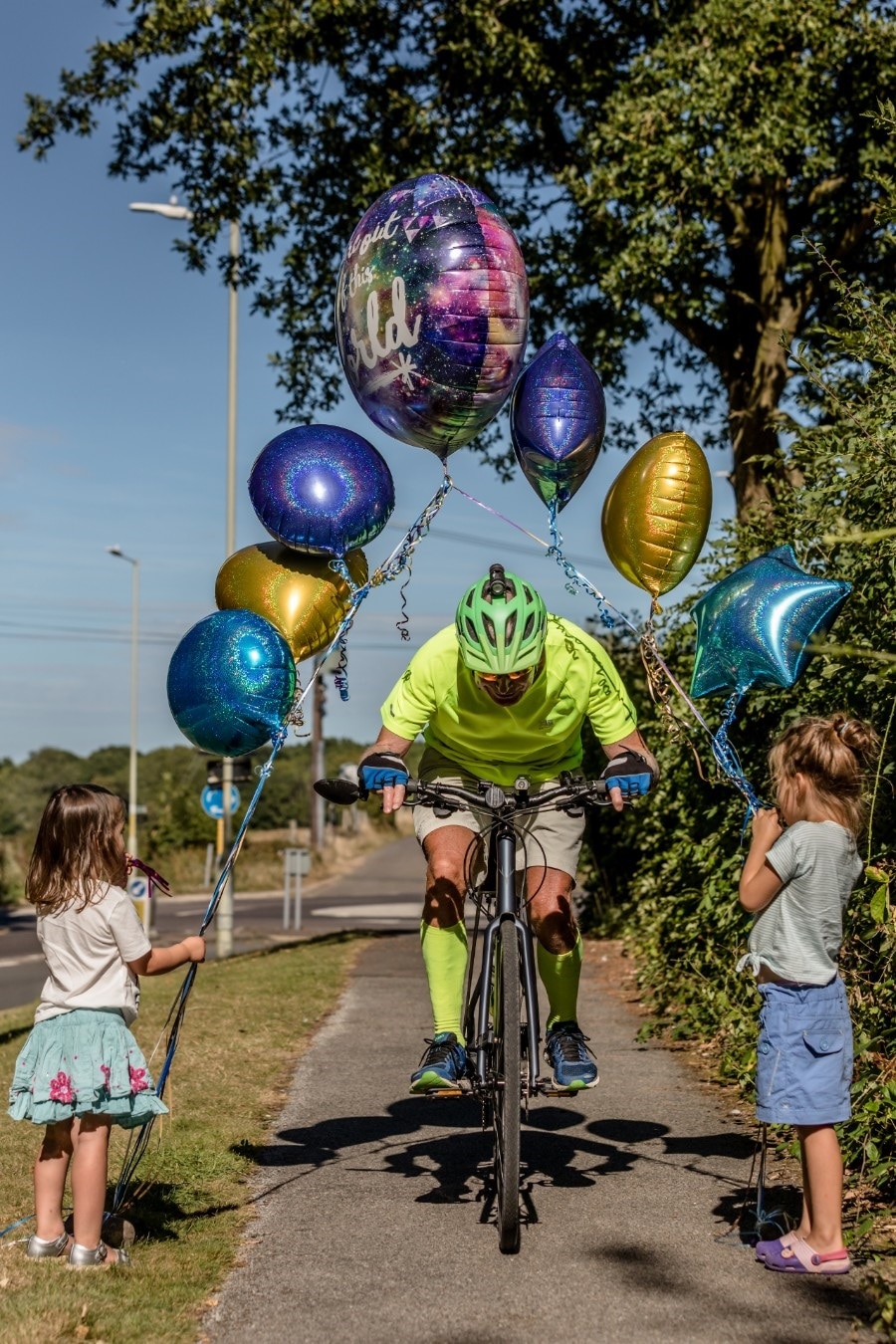 Paul has raised an incredible £1,700 for local hospice care and has more to gather in.

Fundraising Manager, Kate Duddell said: “We would like to thank all those who have supported Paul in raising an impressive £1,700 for end of life care in east Kent. The amount raised for hospice care is so valuable and will allow us to provide the best possible support to families who need us. Every £25 would pay for an hour of nursing care. The funds raised by Paul and his loved ones are vital to the work Pilgrims Hospices does across east Kent and is continuing to do so during the pandemic.”

Paul was aiming for this to be his last Pilgrims Cycle Challenge, however he loves a challenge, and a little adventure and may be tempted to join the new 30 mile route in 2021. For this year, and now he has completed his own pedalling challenge for Pilgrims, he is looking forward to becoming a grandad for the first time and walking his daughter down the aisle this September.

You can still support Paul and his 100 mile achievement by donating to his JustGiving page.