Councillor and The Mayor of Hythe, Jim Martin, took to the Kentish countryside to run the Virtual London Marathon on Sunday 2 October 2022.

While over 40,000 runners took part in the London event, another 10,000  took to their local streets, parks and countryside to test their stamina against the mighty 2,624 marathon miles to be part of the prestigious event, many raising funds for causes close to their hearts.

The Right Worshipful Town Mayor who is also the Speaker of the Cinque Ports, was fundraising for Pilgrims Hospices, and achieved a very impressive finishing time of 5:30.27 hours raising a fantastic £3,500 for end-of-life care for the local community.

He said: “I am a regular runner, along the canal path or along the promenade, and I have completed 25 full Marathons, including 20 consecutive London Marathons (don’t ask me why!)

“The virtual marathon took me along the South Coast in Hythe where I live, using the Royal Military Canal as my route. As much as I love the built environment and streets of London, I can assure you that running in Hythe, ‘where the countryside meets the sea’, by the canal, beats running through Shadwell!

“This has been my first marathon running as The Mayor of Hythe and the Speaker of the Cinque Ports. And…. just to note, I was not running in my robes and chain!”

Community is very important to me, I was pleased to raise awareness of the care and services provided by Pilgrims, and highlight the important work they do for those in need.

Kate Duddell, Pilgrims Hospices Fundraising Manager said: “Thank you The Mayor of Hythe for supporting local end-of-life care. Every year we are glad to say thank-you to the amazing individuals who train so hard to be part of this event and raise such staggering amounts of money to help us provide our specialist care. Your many miles of muscle power and dedication is really helping to make a difference to those who need care the most.”

Jim has lived in Hythe since 2007, when he and his wife moved from South East London to their home in Seabrook.

He explained: “Community is very important to me, I was pleased to raise awareness of the care and services provided by Pilgrims, and highlight the important work they do for those in need. With support from family, colleagues and the community, I’m delighted to have been able to raise such a substantial figure for Pilgrims. With 80% of Pilgrims Hospices’ funding being voluntary contributions, their support cannot be overstated.

“Thank you, everyone for your support, the weather was very wet and I finished completely drenched, but delighted to finish in good form.”

Pilgrims Hospices is dedicated to proving skilled and compassionate care, free of charge, to people living with an incurable illness in east Kent. Their vision is that people with a life-limiting illness are supported and empowered to live well in mind and body, making the most of the time have. They care for thousands of patients and their families each year, at their three inpatient units in Canterbury, Thanet and Ashford, their Therapy Centres or in patients’ homes.

Rob Playford from Ashford set out to complete a charity challenge to raise vital funds for Pilgrims Hospices. Rob originally planned to a 50k run in May between the Ashford and Canterbury Pilgrims Hospices and then back again, in memory of his late Mother in Law Joan Capell, who was cared for at the Ashford Hospice.

But circumstances being as they are, Rob had to soon adapt his fundraising efforts with an interim event while he patiently waited to run his original goal. Rob decided to row, ride and run for the local hospice care.

Rob’s new idea, now called ‘Rob-athon’, began with a 1/2 marathon (21.1k) row in his garage, followed by a 30k bike ride and then to top it off, he then completed a 10k run, all back-to-back! Rob was spurred on in the final 3k by one of his team mates from Ashford Hockey Club. 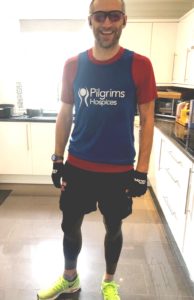 Rob told us: “If someone had said to me 6 months ago you’ll be doing a 60K+ row, ride and run all in one go I would have fallen over laughing.

“But it is amazing the drive you can find when you remind yourself why you are doing something.

“It wasn’t easy but I just focused on the amazing support Pilgrims Hospices had given Joan, Sarah (my wife) and the family last year.  The hospices do such an amazing job and I just wanted to show our appreciation.”

Louise Newman, Ashford Community Fundraising Manager said: “We would like to thank Rob for his ingenious Rob-athlon – row, ride, race idea and all those who have supported him to raise £1,750 and counting for end of life care in east Kent.

“The amount raised for hospice care is so valuable and will allow us to provide the best possible support to families who need us. Every £25 could pay for one hour of nursing care, either on our wards or in a patient’s own home, the funds raised through our communities own events during this challenging time, such as these, are vital to the work Pilgrims Hospices does across east Kent.”

Rob is still planning for his 50k run, but in the meantime he has managed to raise an incredible £1,750 so far and is well on his way to achieving his target. If you would still like to support him please donate here http://www.justgiving.com/Rob-Playford.

Pilgrims Hospices are still delivering compassionate end of life care to over 2,500 people in our community during this current health crisis, we are StillHere, StillCaring for people who need us in these challenging times.

There are so many ways that you can continue to support Pilgrims. Click here for some virtual fundraising ideas. If you would like to take on a challenge in support of Pilgrims we would love to hear from you. Please contact our fundraising team here.

The team at Clague Architects in Canterbury have been clocking up the miles in aid of Pilgrims Hospices. 15 members of the team have pledged to complete a total of 140 miles by cycling, walking or through other creative means.

Chris Sherlock-Scougall, Associate Architect, started off the challenge by connecting Dymchurch and Folkestone. Getting creative, Chris ditched the traditional methods and instead donned his roller blades completing laps around his garden. He successfully covered the 10 miles he needed to pass the virtual baton over to Cheryl Warwick and Stuart Bonnage who completed the next leg to Marine Parade Dover using a more conventional manner, their bikes!

Cheryl Warwick, Architectural Technologist said: “Pilgrims is a charity close to many people’s hearts and now more than ever we need to show our support.

“This was a perfect challenge to reboot our support for Pilgrims as well as bringing the team together.”

The team are aiming to finish the relay mid July at their offices based in Burgate, Canterbury.

Good luck from everyone at Pilgrims!

We are so grateful to have businesses like Clague as part of our community.

Colleagues at Clague have long been supporting Pilgrims, entering teams into various events including the annual Pilgrims Cycle Challenge which sees over 1,000 cyclists take on various routes across east Kent. In 2019, a group of staff took on the London Revolution Cycle challenge raising over £500.

Leila Ilkhan, Canterbury Community Fundraising Manager thanks the team at Clague for their wonderful support saying: “With the unexpected challenges we have been faced with over the last few months, we are so grateful to have businesses like Clague as part of our community. As a team, Clague is making a big difference to the lives of patients and their families living with an incurable illness. Their support is so very much appreciated by everyone at Pilgrims.”

Clague have set up an online giving page. If you would like to support their challenge you can do so here.

There are so many ways that you can continue to support Pilgrims. Click here for some virtual fundraising ideas.

If you would like to take on a challenge in support of Pilgrims we would love to hear from you. Please contact our fundraising team here.